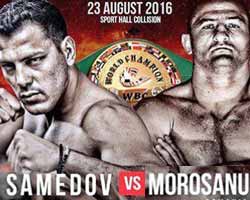 Review by AllTheBestFights.com: 2016-08-23, great fight between Zabit Samedov and Catalin Morosanu: it is close to get four stars!

Zabit Samedov entered this fight with a professional kickboxing record of 76-9-1 (35 knockouts) and he is ranked as the No.6 heavyweight in the world. He suffered his last defeat in 2013 when he faced Badr Hari in their rematch (=Hari vs Samedov 2), since then he has won 12 consecutive bouts taking revenge on Hari in their third fight (=Hari vs Samedov 3) and beating Paul Slowinski in his last bout (=Samedov vs Slowinski 2).
His opponent, Catalin Morosanu, has an official record of 42-9-0 (25 knockouts) and he entered as the No.9 in the same weight class but he comes off the loss against Daniel Sam (via split decision, Morosanu vs Sam). Samedov vs Morosanu, main event of Akhmat Fight Show, is valid for the Wbc Muay Thai heavyweight title. Watch the video and rate this fight!