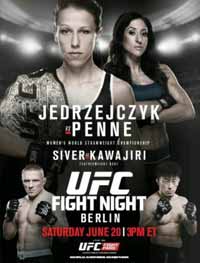 Review by AllTheBestFights.com: 2015-06-20, fight not particularly exciting between Dennis Siver and Tatsuya Kawajiri: it gets two stars.

The black belt in tae-kwon-do Dennis Siver entered this fight with a pro mma record of 22-10-0 (64% finishing rate) and he is ranked as the No.26 featherweight in the world while his opponent, the former Shooto Lw champion Tatsuya Kawajiri, has an official record of 33-8-2 (67% finishing rate) and he entered as the No.38 in the same weight class. Both fighters have lost their last bout: Siver was defeated by Conor McGregor (=McGregor vs Siver) while Kawajiri lost to Clay Guida (=Guida vs Kawajiri). Siver vs Kawajiri is on the undercard of Joanna Jedrzejczyk vs Jessica Penne – UFC Fight Night 69. Watch the video and rate this fight!