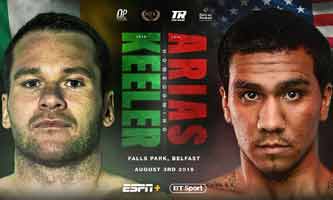 Review by AllTheBestFights.com: 2019-08-03, fight not so exciting between Luis Arias and Luke Keeler: it gets two stars.

Luis Arias entered this fight with a pro boxing record of 18-1-1 (9 knockouts) and he is ranked as the No.26 middleweight in the world but he won just one out of his last three fights, against Arif Magomedov in 2017 (Arif Magomedov vs Luis Arias); after this bout he has been defeated by Daniel Jacobs (Daniel Jacobs vs Luis Arias) and has tied with Gabriel Rosado.
His opponent, Luke Keeler, has a record of 16-2-1 (5 knockouts) and he entered as the No.44 in the same weight class. He lost to Tom Doran in 2016 but then he has collected one draw and six victories defeating Conrad Cummings in 2019. Arias vs Keeler is on the undercard of Michael Conlan vs Diego Alberto Ruiz. Watch the video and rate this fight!