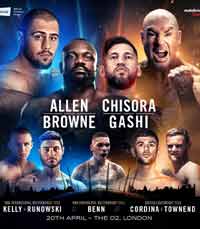 Review by AllTheBestFights.com: 2019-04-20, some good exchanges between Josh Kelly and Przemyslaw Runowski but it is not enough to get three stars: it gets two.

Both undefeated, the former Olympian Josh Kelly entered this fight with a perfect record of 8-0-0 (6 KOs=75%) and he is ranked as the No.25 welterweight in the world while his opponent, Przemyslaw Runowski, has an official record of 17-0-0 (3 knockouts) and he entered as the No.110 in the same weight class. In their last three bouts Kelly has won over Carlos Molina (Josh Kelly vs Carlos Molina), Kris George (Josh Kelly vs Kris George) and Walter Fabian Castillo (Josh Kelly vs Walter Fabian Castillo) while Runowski has beat Alain Chervet, Twaha Kiduku and Siarhei Huliakevich. Kelly vs Runowski is valid for the WBA International welterweight title; undercard of David Allen vs Lucas Browne. Watch the video and rate this fight!