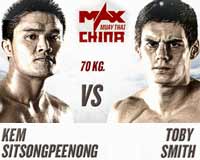 Review: 2014-02-16, technical fight with some nice elbows but the fight was not so spectacular: Kem Sitsongpeenong vs Toby Smith gets two stars. Kem Sitsongpeenong entered this fight with a professional kickboxing record of 120-23-4 (41 knockouts) and he is ranked as the No.3 welterweight in the world, he fought six times in 2013 winning five bouts, the only fight he didn’t win was against Jordan Watson (fight ended in a draw). But 2014 has not started very well for the Thai fighter since he lost his last bout and his WBC Muaythai world super welterweight title against Vitaly Gurkov (not a great fight, we rated it two stars).
His opponent, Toby Smith, has an official record of 33-5-2 (9 knockouts) and he entered as the No.3 super welterweight, he is one of Australia’s most promising muay thai fighters since he is just 20 years old and he managed to win the WPMF junior middleweight world title and in his last fight he defeated Thongchai Sitsongpeenong (Lumpinee Stadium welterweight champion). Kem vs Smith is the main event of “MAX Muay Thai 6: Zhengzhou”. Watch the video and rate this fight!