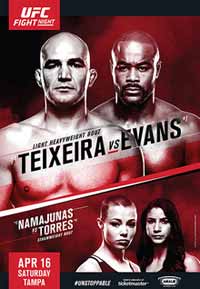 Review by AllTheBestFights.com: 2016-04-16, good fight between Khabib Nurmagomedov and Darrell Horcher: it gets three stars.

The undefeated black belt in judo and former World Combat Sambo champion Khabib Nurmagomedov entered this fight with a perfect record of 22-0-0 (64% finishing rate) but he is not ranked as he hasn’t fought since April 19, 2014 when he beat #1 Ufc Lw champion Rafael dos Anjos (=dos Anjos vs Nurmagomedov).
His opponent, Darrell Horcher (who replaces Tony Ferguson), has a mma record of 12-1-0 (58% finishing rate) and he entered as the No.65 lightweight in the world. He suffered his only loss when he faced Phillipe Nover in 2013, since then he has won five consecutive bouts beating Stephen Regman in his last one. Nurmagomedov vs Horcher is on the undercard of Glover Teixeira vs Rashad Evans – UFC on Fox 19. Watch the video and rate this fight!