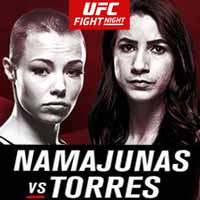 Review by AllTheBestFights.com: 2016-04-16, some good exchanges between Rose Namajunas and Tecia Torres but it is not enough to get three stars: it gets two.

The black belt in tae-kwon-do and karate Rose Namajunas entered this fight with a professional record of 4-2-0 (100% submission victory rate – she has never won via ko/tko) and she is ranked as the No.5 women’s strawweight in the world (currently the #1 in this division is Joanna Jedrzejczyk). She lost two consecutive bouts between 2013 and 2014, against Tecia Torres and Carla Esparza (=Esparza vs Namajunas), but she came back to win in 2015 beating Angela Hill and Paige VanZant (=Namajunas vs VanZant).
Her opponent, the undefeated Tecia Torres (black belt in tae-kwon-do and karate as well), has a perfect record of 7-0-0 (0% finishing rate – she has never won via ko or submission) and she entered as the No.9 in the same weight class. She fought twice last year winning over Angela Hill (=Torres vs Hill) and Jocelyn Jones-Lybarger. Namajunas vs Torres 2 is on the undercard of Glover Teixeira vs Rashad Evans – UFC on Fox 19. Watch the video and rate this fight!