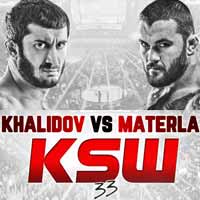 The black belt in karate and tae-kwon-do Mamed Khalidov entered this fight with a pro record of 30-4-2 (93% finishing rate) and he is ranked as the No.13 middleweight in the world. He suffered his last defeat in 2010 when he faced Jorge Santiago, since then he has collected ten victories and one draw beating Brett Cooper in his last bout (=Khalidov vs Cooper).
His opponent, Michal Materla, has an official mma record of 22-4-0 (73% finishing rate) and he entered as the No.20 in the same weight class. He lost the rematch with Jay Silva in 2013 (=Materla vs Silva 2), but then Materla took revenge on the Brazilian in 2014 (=Materla vs Silva 3) and won over Jorge Luis Bezerra (=Materla vs Bezerra) and Tomasz Drwal (=Materla vs Drwal). Khalidov vs Materla, main event of KSW 33, is valid for the KSW middleweight title (Materla’s fifth defense). Watch the video and rate this fight!