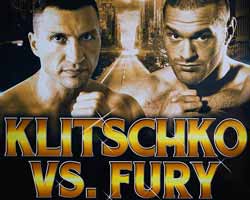 Review by AllTheBestFights.com: 2015-11-28, four world titles on the line and they landed an average of just 5/6 punches per round: shameful, Wladimir Klitschko vs Tyson Fury gets one star.

The 39-year-old Wladimir Klitschko (12 years older than Fury) entered this fight with a pro boxing record of 64-3-0 (53 KOs=83%) and he is ranked as the No.1 heavyweight in the world. He suffered his last defeat in 2004 when he faced Lamon Brewster for the vacant Wbo belt, since then he has collected 22 consecutive victories taking revenge on Brewster in 2007 and beating Bryant Jennings in his last bout (=Klitschko vs Jennings).
His opponent, the undefeated Tyson Fury, has a record of 24-0-0 (18 KOs=75%) and he entered as the No.3 in the same weight class; he has fought once in 2015 defeating Christian Hammer (=Fury vs Hammer). Klitschko vs Fury is valid for the WBA, IBF, WBO, IBO World heavyweight titles (all held by Klitschko), first world title shot for Fury. Watch the video and rate this fight!

Video: (Free embeddable video hosted on dailymotion and not uploaded by AllTheBestFights, to report it please visit this link where the video is hosted)