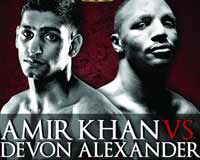 Review: 2014-12-13, fight not particularly exciting between Amir Khan and Devon Alexander: it gets two stars. The former Ibf and Wba light Ww champion Amir Khan entered this fight with a professional boxing record of 29-3-0 (19 knockouts) and he is ranked as the No.11 welterweight in the world (currently the #1 in this division is Floyd Mayweather Jr); he suffered two consecutive defeats between 2011 and 2012, against Lamont Peterson (4-stars-fight, Peterson vs Khan) and Danny Garcia (=Garcia vs Khan), since then he has won three bouts, the last one against Luis Collazo (=Khan vs Collazo).
His opponent, Devon Alexander, has an official record of 26-2-0 (14 knockouts) and he entered as the No.8 in the same weight class, he has won world titles in two different weight classes but he was defeated by Shawn Porter last year losing the the Ibf Ww belt (=Alexander vs Porter), after this bout he came back to win beating Jesus Soto Karass (=Alexander vs Soto Karass). Khan vs Alexander is valid for the WBC Silver welterweight title. Watch the video and rate this fight!