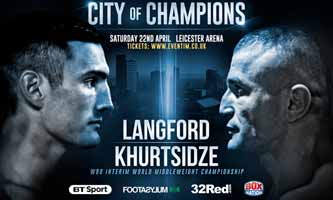 Review by AllTheBestFights.com: 2017-04-22, pretty good finish between Tommy Langford and Avtandil Khurtsidze but it is not enough to get three stars: it gets two.

The undefeated Tommy Langford entered this fight with a perfect boxing record of 18-0-0 (6 knockouts) and he is ranked as the No.24 middleweight in the world. He fought three times last year winning over Lewis Taylor, Timo Laine and Sam Sheedy.
His opponent, the former Ibo Mw champion Avtandil Khurtsidze, has an official record of 32-2-2 (21 knockouts) but he is not ranked as he hasn’t fought since March 5, 2016 when he defeated Antoine Douglas. Avtandil Khurtsidze vs Tommy Langford is valid for the interim WBO World middleweight title. Watch the video and rate this fight!