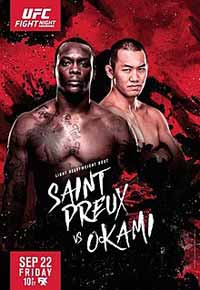 Review by AllTheBestFights.com: 2017-09-23, pretty good finish between Takanori Gomi and Dong Hyun Kim but it is not enough to get three stars: it gets two.

The former Pride and Shooto Lw champion Takanori Gomi entered this fight with a mma record of 35-13-0 (54% finishing rate) but he comes off four consecutive defeats, the last one against Jon Tuck.
His opponent, Dong Hyun Kim, has an official record of 14-8-3 (79% finishing rate) but he lost two out of his last three fights, against Dominique Steele and Marco Polo Reyes; after this bout he has won over Brendan O’Reilly. Dong Hyun Kim vs Takanori Gomi is on the undercard of Ovince St Preux vs Yushin Okami – UFC Fight Night 117. Watch the video and rate this fight!