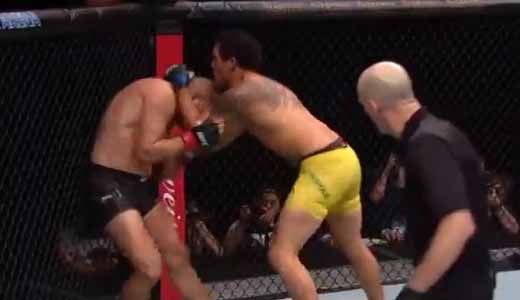 Review by AllTheBestFights.com: 2017-09-23, tough fight with some nice exchanges and a spectacular finish: Gokhan Saki vs Henrique da Silva this is one of the best mma fights of 2017 and it gets four stars (UFC Performance of the Night).

The former Glory light-Hw kickboxing champion Gokhan Saki entered this fight with a professional mma record of 0-1-0 but he has kickboxing record of 83-12-0 (59 knockouts). He debuted in mixed martial arts in 2004 but he lost to James Zikic via tko; in his last kickboxing fight he beat Sebastian Ciobanu in 2015 (=Saki vs Ciobanu).
His opponent, Henrique da Silva, has a record of 12-3-0 (100% finishing rate) and he entered as the No.78 light heavyweight in the world but he comes off three consecutive losses, two in 2017, against Jordan Johnson and Ion Cutelaba. Gokhan Saki vs Henrique da Silva is on the undercard of Ovince St Preux vs Yushin Okami – UFC Fight Night 117. Watch the video and rate this fight!

(Free embeddable video hosted on Youtube and not uploaded by AllTheBestFights)
https://www.youtube.com/watch?v=tbk-VYZwFv4