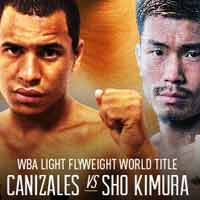 Review by AllTheBestFights.com: 2019-05-26, good performance by both boxers: Sho Kimura vs Carlos Canizales gets three stars.

The former Wbo Flw champion Sho Kimura entered this fight with a boxing record of 18-2-2 (11 knockouts) and he is ranked as the No.8 flyweight in the world. He lost to current #1 Flw Kosei Tanaka in 2018 (via majority decision, Sho Kimura vs Kosei Tanaka) but he came back to win in 2019 against Pigmy Kokietgym (also known as Wicha Phulaikhao).
His opponent, the undefeated Wba light-Flw champ Carlos Canizales, has an official record of 21-0-1 (17 KOs=81%) and he entered as the No.17 in the same weight class. The only man who stopped ‘CCC’ Canizales in a draw was Ryoichi Taguchi in 2016 (Ryoichi Taguchi vs Carlos Canizales), after this fight he has won five bouts defeating Reiya Konishi (Reiya Konishi vs Carlos Canizales) and Bin Lu in 2018 (Carlos Canizales vs Bin Lu). Kimura vs Canizales is valid for the WBA World light flyweight title (Canizales’ second defense); undercard of Can Xu vs Shun Kubo. Watch the video and rate this fight!