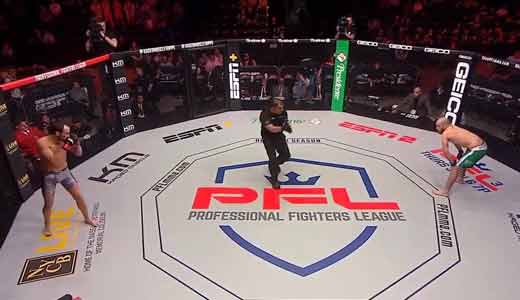 Review by AllTheBestFights.com: 2019-05-23, spectacular finish between Damon Jackson and Movlid Khaibulaev: this is one of the best mma fights of the year 2019 and it gets four stars!!

The former Ufc fighter Damon Jackson entered this fight with a professional mma record of 16-2-1 (94% finishing rate) and he is ranked as the No.43 featherweight in the world. He lost to Kevin Aguilar in 2017 but then he has won five bouts defeating Nate Jennerman in his last one.
His opponent, the undefeated Movlid Khaybulaev, has a perfect record of 12-0-0 (42% finishing rate) but he is not ranked as he hasn’t fought since October 13, 2017 when he beat Ilya Kurzanov; before this bout, in 2017, he had also won over Herbert Burns. Jackson vs Khaybulaev is on the undercard of Lance Palmer vs Alex Gilpin – PFL 2 2019 (also known as PFL 13: Palmer vs. Gilpin). Watch the video and rate this fight!