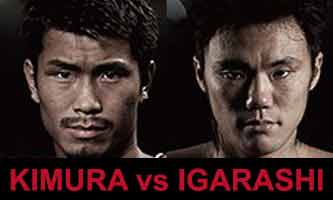 Review by AllTheBestFights.com: 2017-12-31, good performance by both fighters: Sho Kimura vs Toshiyuki Igarashi gets three stars.

The Wbo Flw champion Sho Kimura entered this fight with a professional record of 15-1-2 (8 knockouts) and he is ranked as the No.10 flyweight in the world (currently the #1 in this division is Donnie Nietes). He suffered his only defeat at his pro boxing debut in 2013, against Shosuke Oji, since then he has collected 15 victories and two draws beating Wisitsak Saiwaew and Zou Shiming in 2017 (=Shiming vs Kimura).
His opponent, the former Wbc Flw champion Toshiyuki Igarashi, has an official record of 23-2-3 (12 knockouts) and he entered as the No.17 in the same weight class. He lost to Akira Yaegashi in 2013 (=Igarashi vs Yaegashi) but then he has collected six wins and two draws, the last one with Miguel Cartagena in 2017. Kimura vs Igarashi is valid for the WBO World flyweight title (Kimura’s first defense); undercard of Milan Melindo vs Ryoichi Taguchi. Watch the video and rate this fight!

(Free embeddable video hosted on Youtube and not uploaded by AllTheBestFights)
https://www.youtube.com/watch?v=moDvh4mGelc