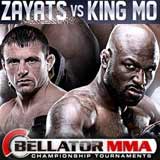 Review: 2014-02-28, disappointing and boring fight: Muhammed Lawal vs Mikhail Zayats gets one star. Muhammed ‘King Mo’ Lawal entered this fight with a pro mma record of 11-3-0 (82% ko/tko victory rate – he has never won via submission) and he is ranked as the No.19 light heavyweight in the world, last year he fought five times losing twice to Emanuel Newton, in their first fight Lawal lost via ko (=Lawal vs Newton) and then via unanimous decision (bout valid for the Bellator light heavyweight title =Lawal vs Newton 2).
His opponent, Mikhail Zayats, has an official record of 22-7-0 (73% finishing rate) and he entered as the No.21 in the same weight class, last year he fought four times losing only to Emanuel Newton like ‘King Mo’ (=Newton vs Zayats). Lawal vs Zayats is the semifinal of the Bellator light heavyweight tournament; undercard of Quinton ‘Rampage’ Jackson vs Christian M’Pumbu – Bellator 110. Watch the video and rate this fight!