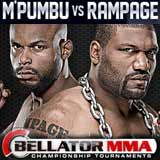 Review: 2014-02-28, fight not so exciting between Quinton Jackson and Christian M’Pumbu: it gets two stars. Quinton ‘Rampage’ Jackson entered this fight with a professional mma record of 33-11-0 (66% finishing rate) and he is ranked as the No.14 light heavyweight in the world, last year he debuted in the Bellator winning Joey Beltran (=Jackson vs Beltran) after having suffered three consecutive defeats in the Ufc.
His opponent, Christian M’Pumbu, has an official record of 18-5-1 (83% finishing rate) and he entered as the No.49 in the same weight class, last year he fought only once losing to Attila Vegh, fight in which he also lost the Bellator light heavyweight title (=M’pumbu vs Vegh). Rampage Jackson vs M’Pumbu is the semifinal of the Bellator light heavyweight tournament, main event of Bellator 110. Watch the video and rate this fight!