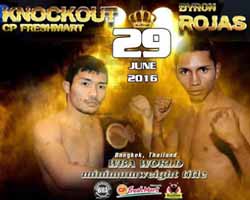 Review by AllTheBestFights.com: 2016-06-29, good exchanges in the first part of the fight but the second one was not so exciting: Knockout CP Freshmart vs Byron Rojas gets two stars.

The undefeated Knockout CP Freshmart entered this fight with a perfect boxing record of 12-0-0 (6 knockouts) and he is ranked as the No.2 minimumweight in the world (currently the #1 in this division is Saul Juarez). He has already fought once in 2016 beating Carlos Buitrago (=CP Freshmart vs Buitrago 2).
His opponent, Byron Rojas, has an official record of 17-2-3 (8 knockouts) and he entered as the No.5 in the same weight class. He suffered two consecutive losses in 2012, against Luis Rios and Roger Collado, but since then he has collected 11 victories and one no-contest beating Hekkie Budler in 2016. CP Freshmart vs Rojas is valid for the WBA World minimumweight title. Watch the video and rate this fight!