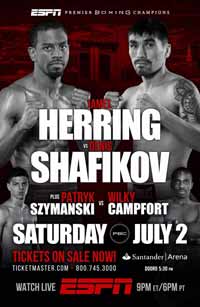 Review by AllTheBestFights.com: 2016-07-02, good fight between Jamel Herring and Denis Shafikov: it gets three stars.

Denis Shafikov entered this fight with a boxing record of 36-2-1 (19 knockouts) and he is ranked as the No.11 lightweight in the world. He fought twice last year beating Roy Mukhlis (=Shafikov vs Mukhlis) but then he lost to Rances Barthelemy (=Barthelemy vs Shafikov).
His opponent, the undefeated Jamel Herring, has a perfect record of 15-0-0 (8 knockouts) and he entered as the No.75 in the same weight class. He has already fought once in 2016 defeating Luis Eduardo Florez. Shafikov vs Herring is the main event of the evening. Watch the video and rate this fight!