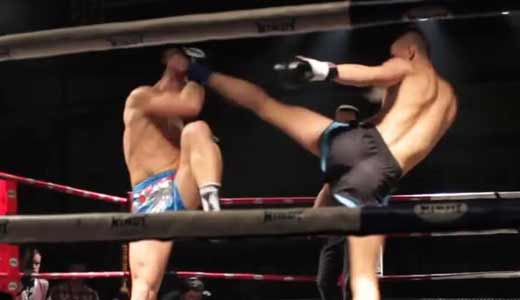 Review: 2014-03-01, good start, some nice shots and one of the best knockouts of the year: Juri Kehl vs Jordan Watson gets four stars! Juri Kehl entered this fight with a professional kickboxing record of 47-7-0 and he is ranked as the No.14 super welterweight in the world while Jordan Watson has an official record of 41-10-2 (19 knockouts) and he entered as the No.11 in the same weight class; on the original fight card Watson was expected to face Juri’s brother, Enriko Kehl, but he has forced to withdraw from the bout due to a cut from his previous fight held just one week before (the semifinal of the K-1 World MAX: Kehl vs Campbell). Both Juri Kehl and Watson last year fought and lost against Sitthichai Sitsongpeenong via decision (at MAX Muay Thai). Kehl vs Watson is the main event of “Siam Warriors: Revolution on Leeside”. Watch the video and rate this fight!