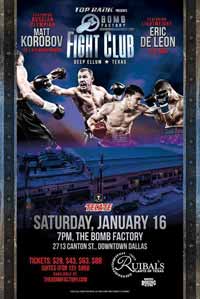 Review by AllTheBestFights.com: 2016-01-16, fight not particularly good between Matt Korobov and Josue Ovando: it gets two stars.

The 2005 and 2007 world amateur boxing champion Matt Korobov entered this fight with a professional record of 24-1-0 (14 knockouts) but he is not ranked as he hasn’t fought since December 13, 2014 when he suffered his first and only defeat, against Andy Lee (=Korobov vs Lee).
His opponent, Josue Ovando, has a boxing record of 14-8-1 (11 KOs=79%) but he won just one out of his last four bouts, against Ronald Hearns; after this fight he lost to Hugo Centeno Jr. Korobov vs Ovando is the main event of the evening. Watch the video and rate this fight!