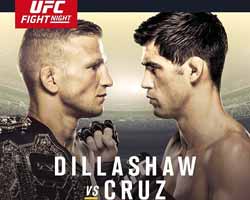 Review by AllTheBestFights.com: 2016-01-17, pretty good fight between TJ Dillashaw and Dominick Cruz: it gets three stars (UFC Fight of the Night).

TJ Dillashaw entered this fight with a mma record of 12-2-0 (75% finishing rate) and he is ranked as the No.1 bantamweight in the world. He won the Ufc Bw belt in 2014 defeating Renan Barao (=Barao vs Dillashaw I) and he defended it twice beating Joe Soto (=Dillashaw vs Soto) and Barao in their rematch (=Dillashaw vs Barao II).
His opponent, the former Ufc and Wec bantamweight champion Dominick Cruz, has an official record of 20-1-0 (40% finishing rate) but he is not ranked as he hasn’t fought since September 27, 2014 when he defeated Takeya Mizugaki (=Cruz vs Mizugaki); Cruz’s only loss occurred in 2007 when he faced Urijah Faber. Dillashaw vs Cruz, main event of UFC Fight Night 81, is valid for the Ufc bantamweight title (Dillashaw’s third defense). Watch the video and rate this fight!