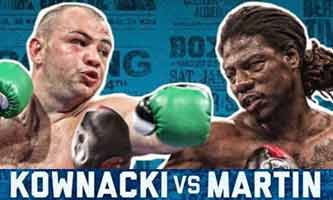 The undefeated Adam Kownacki entered this fight with a perfect record of 17-0-0 (14 KOs=82%) and he is ranked as the No.12 heavyweight in the world. In his last three fights he has won over Joshua Tufte, Artur Szpilka (Szpilka vs Kownacki) and Iago Kiladze (Adam Kownacki vs Iago Kiladze).
His opponent, Charles Martin, has an official boxing record of 25-1-1 (23 KOs=92%) but he is not ranked as he hasn’t fought since July 18, 2017 when he defeated Michael Marrone; before this bout he had also beat Byron Polley but in 2016 he had lost to current #1 Anthony Joshua (Charles Martin vs Anthony Joshua). Kownacki vs Martin is on the undercard of Danny Garcia vs Shawn Porter. Watch the video and rate this fight!

(Free embeddable video hosted on Facebook not uploaded by AllTheBestFights)