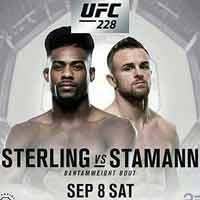 Review by AllTheBestFights.com: 2018-09-08, great performance by both fighters: Aljamain Sterling vs Cody Stamann gets three stars.

Aljamain Sterling entered this fight with a pro record of 15-3-0 (53% finishing rate) and he is ranked as the No.6 bantamweight in the world (currently the #1 in this division is TJ Dillashaw). He lost to Marlon Moraes at the end of 2017 (Aljamain Sterling vs Marlon Moraes) but he came back to win in 2018 with Brett Johns (Brett Johns vs Aljamain Sterling).
His opponent, Cody Stamann, has an official mma record of 17-1-0 (53% finishing rate) and he entered as the No.19 in the same weight class. He suffered his only loss when he faced Lawrence DiGiulio in 2014, since then he has won ten consecutive fights defeating Terrion Ware, Tom Duquesnoy (Tom Duquesnoy vs Cody Stamann) and Bryan Caraway in his last three. Sterling vs Stamann is on the undercard of Tyron Woodley vs Darren Till – UFC 228. Watch the video and rate this fight!