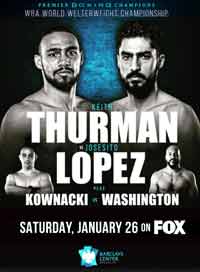 The undefeated Adam Kownacki entered this fight with a perfect record of 18-0-0 (14 KOs=78%) and he is ranked as the No.11 heavyweight in the world. In his last three fights he has won over Artur Szpilka (Szpilka vs Kownacki), Iago Kiladze (Adam Kownacki vs Iago Kiladze) and Charles Martin (Adam Kownacki vs Charles Martin).
His opponent, Gerald Washington, has an official boxing record of 19-2-1 (12 knockouts) and he entered as the No.44 in the same weight class. But he lost two out of his last three fights, against Deontay Wilder (Deontay Wilder vs Gerald Washington) and Jarrell Miller (Jarrell Miller vs Gerald Washington); after this bout he has beat John Wesley Nofire. Kownacki vs Washington is on the undercard of Keith Thurman vs Josesito Lopez. Watch the video and rate this fight!