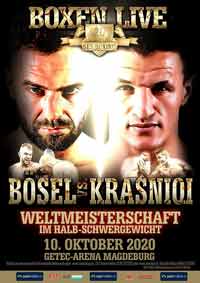 Review by AllTheBestFights.com: 2020-10-10, Dominic Boesel vs Robin Krasniqi gets three stars thanks to a good finish.
The interim WBA and IBO light-Hw champion Dominic Boesel entered this fight with a boxing record of 30-1-0 (12 knockouts) and he is ranked as the No.13 light heavyweight in the world. He lost to Karo Murat in 2017 (Dominic Boesel vs Karo Murat), but then he has won six bouts beating Enrico Koelling, Timy Shala (Dominic Boesel vs Timy Shala 2) and Sven Fornling in his last three (Dominic Boesel vs Sven Fornling).
His opponent, Robin Krasniqi, has an official record of 50-6-0 (18 knockouts) and he entered as the No.42 in the same weight class. He was defeated by Stefan Haertel last year (Robin Krasniqi vs Stefan Haertel) but he comes back to win against Stanislav Eschner in 2020. Krasniqi vs Boesel is valid for the interim WBA and IBO World light-heavyweight titles. Watch the video and rate this fight!