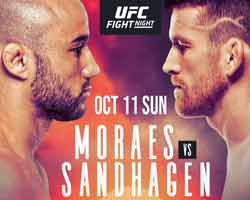 Review by AllTheBestFights.com: 2020-10-11, good fight between Marlon Moraes and Cory Sandhagen: it gets three stars (UFC Performance of the Night).
The black belt in Bjj and former Wsof Bw champ Marlon Moraes entered this fight with a professional mma record of 23-6-1 (70% finishing rate) and he is ranked as the No.2 bantamweight in the world (currently the #1 in this division is Petr Yan). He fought three times last year beating Raphael Assuncao (Raphael Assuncao vs Marlon Moraes 2) and Jose Aldo (Marlon Moraes vs Jose Aldo) but between these two fights he lost to Henry Cejudo (Henry Cejudo vs Marlon Moraes).
His opponent, Cory Sandhagen, has an official record of 12-2-0 (58% finishing rate) and he entered as the No.10 in the same weight class but he comes off the loss against Aljamain Sterling (Aljamain Sterling vs Cory Sandhagen); before this bout, in 2019, he had beat Mario Bautista, John Lineker (John Lineker vs Cory Sandhagen) and Raphael Assuncao (Cory Sandhagen vs Raphael Assuncao). Sandhagen vs Moraes is the main event of the UFC Fight Night 179 (also known as UFC on ESPN+ 37 or UFC Fight Island 5). Watch the video and rate this fight!