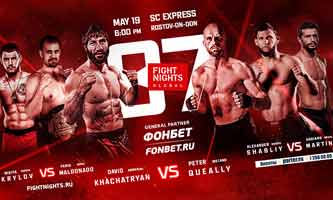 Review by AllTheBestFights.com: 2018-05-19, good finish between Nikita Krylov and Fabio Maldonado: it gets three stars.

The black belt in karate Nikita Krylov entered this fight with a professional mma record of 23-5-0 (100% finishing rate) and he is ranked as the No.17 light heavyweight in the world. He was defeated by Misha Cirkunov in 2016 but then he beat Stjepan Bekavac (Nikita Krylov vs Stjepan Bekavac), Maro Perak and Emanuel Newton in 2017.
His opponent, the current FNG light-Hw champion Fabio Maldonado, has an official record of 24-11-0 (75% finishing rate) and he entered as the No.22 in the same weight class. ‘Caipira de Aco’ Maldonado lost four consecutive bouts between 2015 and 2016, the last two with Fedor Emelianenko (Fedor Emelianenko vs Fabio Maldonado) and Mikhail Mokhnatkin, but then he has won over Abdul-Khamid Davlyatov and Kurban Omarov. Krylov vs Maldonado is valid for the FNG light heavyweight title (Maldonado’s first defense); undercard of David Khachatryan vs Peter Queally – Fight Nights Global 87. Watch the video and rate this fight!