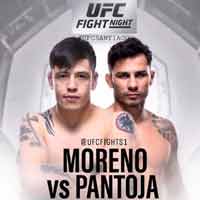 Review by AllTheBestFights.com: 2018-05-19, pretty good fight between Brandon Moreno and Alexandre Pantoja: it gets three stars.

Brandon Moreno entered this fight with a pro record of 14-4-0 (79% finishing rate) and he is ranked as the No.7 flyweight in the world (currently the #1 in this division is Demetrious Johnson). He fought twice in 2017 beating Dustin Ortiz (Moreno vs Ortiz) and losing to Sergio Pettis (Sergio Pettis vs Brandon Moreno).
His opponent, Alexandre Pantoja, has an official mma record of 18-3-0 (72% finishing rate) and he entered as the No.18 in the same weight class but he comes off the loss against Dustin Ortiz (Dustin Ortiz vs Alexandre Pantoja); before this bout, in 2017, he had beat Eric Shelton and Neil Seery (Pantoja vs Seery). Moreno vs Pantoja is on the undercard of Demian Maia vs Kamaru Usman – UFC Fight Night 129. Watch the video and rate this fight!