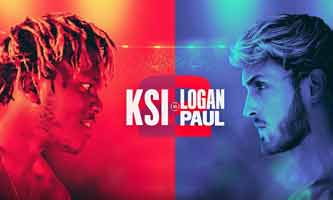 Review by AllTheBestFights.com: 2019-11-09, fight not particularly good between KSI and Logan Paul 2: it gets two stars.

KSI (real name Olajide William Olatunji) is a British YouTuber, internet personality and rapper known for his YouTube account under the name KSIOlajideBT.
His opponent, Logan Paul, is an American YouTuber, internet personality and actor known for his YouTube channels TheOfficialLoganPaul and Logan Paul Vlogs.
Before this fight Olajide Olatunji has been involved in two high-profile amateur white-collar boxing bouts: the first one, against the British YouTuber Joe Weller, was won by KSI via tko in three rounds, while the second one, versus Logan Paul, ended in a majority draw (amateur boxing fight held on August 25, 2018 – KSI vs Logan Paul I) and it was labelled ‘the largest event in YouTube history’. KSI vs Logan Paul 2 is the main event of the evening and it is scheduled for six 3 minute rounds in the cruiserweight division. Watch the video and rate this fight!

Their previous fight: KSI vs Logan Paul I

KSI’s next fight: Swarmz vs KSI vs Luis Alcaraz Pineda