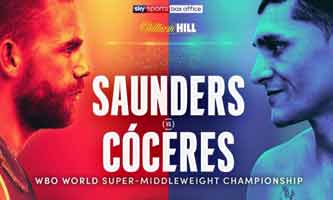 Review by AllTheBestFights.com: 2019-11-09, pretty good finish between Billy Joe Saunders and Marcelo Esteban Coceres but it is not enough to get three stars: it gets two.

Both undefeated, the world champion in two different weight classes Billy Joe Saunders entered this fight with a perfect boxing record of 28-0-0 (13 knockouts) and he is ranked as the No.3 super middleweight in the world (currently the #1 in this division is Callum Smith) while his opponent, Marcelo Esteban Coceres, has an official record of 28-0-1 (15 knockouts) and he entered as the No.43 middleweight. In their last three bouts Saunders has won over David Lemieux (Billy Joe Saunders vs David Lemieux), Charles Adamu and Shefat Isufi (Billy Joe Saunders vs Shefat Isufi) while Coceres has beat Basilio Silva, Carmelito De Jesus and German Ignacio Peralta. Saunders vs Coceres is valid for the WBO World super middleweight title (Saunders’ first defense); undercard of KSI vs Logan Paul 2. Watch the video and rate this fight!