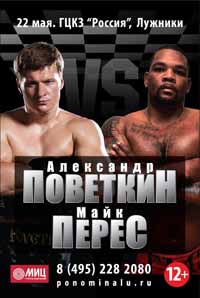 Review by AllTheBestFights.com: 2015-05-22, disappointing fight between Dmitry Kudryashov and Vikapita Meroro: it gets two stars.

The undefeated Dmitry Kudryashov entered this fight with a perfect boxing record of 17-0-0 (17 KOs=100%) and he is ranked as the No.9 cruiserweight in the world while his opponent, Vikapita Meroro, has an official record of 28-4-0 (14 knockouts). Both boxers have already fought once in 2015: Kudryashov has beat Francisco Palacios (=Kudryashov vs Palacios) while Meroro has won over Amour Mzungu. Kudryashov vs Meroro is on the undercard of Alexander Povetkin vs Mike Perez. Watch the video and rate this fight!