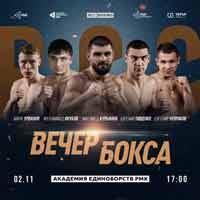 Review by AllTheBestFights.com: 2019-11-02, fight not particularly good between Magomed Kurbanov and Diego Gabriel Chaves: it gets two stars.

The undefeated Magomed Kurbanov entered this fight with a perfect boxing record of 17-0-0 (11 knockouts) and he is ranked as the No.22 super welterweight in the world. In his last three bouts he has won over Charles Manyuchi (Magomed Kurbanov vs Charles Manyuchi), Juan Carlos Rodriguez and Damian Ezequiel Bonelli.
His opponent, the former interim Wba Ww champion Diego Gabriel Chaves, has an official record of 27-4-1 (23 KOs=85%) and he entered as the No.49 in the same weight class. He lost two consecutive bouts between 2017 and 2018, against Jamal James (Diego Gabriel Chaves vs Jamal James) and Thulani Mbenge, but then he has beat Jean Carlos Prada. Kurbanov vs Chaves is valid for the vacant WBO International super welterweight title. Watch the video and rate this fight!