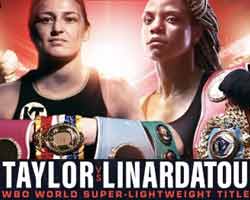 Review by AllTheBestFights.com: 2019-11-02, fight not so exciting between Katie Taylor and Christina Linardatou: it gets two stars.

The undefeated 2012 Olympic gold medalist, current Wbc, Ibf, Wba and Wbo champion Katie Taylor entered this fight with a perfect boxing record of 14-0-0 (6 knockouts) and she is ranked as the No.1 lightweight in the world. In her last three bouts she has won over Eva Wahlstrom (Katie Taylor vs Eva Wahlstrom), Rose Volante (Katie Taylor vs Rose Volante) and Delfine Persoon (Katie Taylor vs Delfine Persoon).
Her opponent, the Wbo super-Lw champ Christina Linardatou, has an official record of 12-1-0 (6 knockouts) and she entered as the No.4 super lightweight. She suffered her only loss when she faced Delfine Persoon in 2016, after this bout she has won four bouts defeating Kandi Wyatt and Deanha Hobbs in 2019. Taylor vs Linardatou is valid for the WBO World female super lightweight title (Linardatou’s second defense). Watch the video and rate this fight!