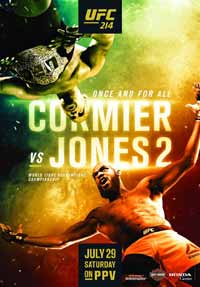 Review by AllTheBestFights.com: 2017-07-29, nice and tough exchanges between Ricardo Lamas and Jason Knight: it gets three stars.

The black belt in Brazilian jiu-jitsu Ricardo Lamas entered this fight with a record of 17-5-0 (53% finishing rate) and he is ranked as the No.4 featherweight in the world. He fought twice last year losing to current #1 Fw Ufc champion Max Holloway (=Holloway vs Lamas) and beating Charles Oliveira (=Lamas vs Oliveira).
His opponent, Jason Knight, has a mma record of 20-2-0 (80% finishing rate) and he entered as the No.14 in the same weight class. He lost to Tatsuya Kawajiri in 2015 (=Kawajiri vs Knight) but then he has beat Jim Alers, Dan Hooker, Alex Caceres (=Knight vs Caceres) and Chas Skelly (=Skelly vs Knight). Ricardo Lamas vs Jason Knight is on the undercard of Daniel Cormier vs Jon Jones 2 – UFC 214. Watch the video and rate this fight!