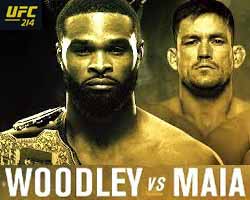 Review by AllTheBestFights.com: 2017-07-29, disappointing fight between Tyron Woodley and Demian Maia: it gets two stars.

The current Ufc Ww champion Tyron Woodley entered this fight with a pro mma record of 17-3-1 (65% finishing rate) and he is ranked as the No.1 welterweight in the world. He lost to Rory MacDonald in 2014 but then he has collected four victories, winning the Ufc title against Robbie Lawler (=Lawler vs Woodley), and one draw, against Stephen Thompson at the end of 2016 (=Woodley vs Thompson I); after this bout he has beat Thompson in their rematch in 2017 (=Woodley vs Thompson II).
His opponent, the black belt in Bjj and 2007 ADCC champion Demian Maia, has a record of 25-6-0 (60% finishing rate) and he entered as the No.3 in the same weight class. He suffered two consecutive defeats between 2013 and 2014, against Jake Shields (=Maia vs Shields) and Rory MacDonald (=MacDonald vs Maia), but then he has won seven bouts beating Carlos Condit (=Maia vs Condit) and Jorge Masvidal in his last two (=Maia vs Masvidal). Tyron Woodley vs Demian Maia is valid for the Ufc welterweight title (Woodley’s third defense); undercard of Daniel Cormier vs Jon Jones 2 – UFC 214. Watch the video and rate this fight!

Woodley’s next fight: Tyron Woodley vs Darren Till

(Free embeddable video hosted on Youtube and not uploaded by AllTheBestFights)
https://www.youtube.com/watch?v=9s1o0X511xY