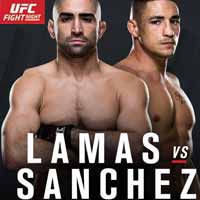 Review by AllTheBestFights.com: 2015-11-21, Ricardo Lamas vs Diego Sanchez gets three stars thanks to a good second part of the fight.

The black belt in Brazilian jiu-jitsu Ricardo Lamas entered this fight with a pro mma record of 15-4-0 (53% finishing rate) and he is ranked as the No.8 featherweight in the world but he comes off the loss against Chad Mendes (=Mendes vs Lamas); currently the #1 in this division is Jose Aldo.
His opponent, the black belt in Gaidojutsu, Bjj and winner of the Tuf 1 Mw tournament Diego Sanchez, has a record of 25-7-0 (60% finishing rate) but he is not ranked as he hasn’t fought since June 7, 2014 when he defeated Ross Pearson (=Sanchez vs Pearson). Lamas vs Sanchez is on the undercard of Neil Magny vs Kelvin Gastelum – The Ultimate Fighter Latin America 2 Finale – UFC Fight Night 78. Watch the video and rate this fight!