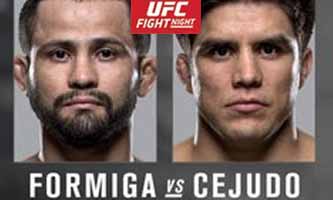 Review by AllTheBestFights.com: 2015-11-21, disappointing fight between Jussier da Silva and Henry Cejudo: it gets two stars.

The black belt in Bjj and judo Jussier ‘Formiga’ da Silva entered this fight with a professional record of 18-3-0 (44% submission victory rate – he has never won via ko/tko) and he is ranked as the No.3 flyweight in the world (currently the #1 in this division is Demetrious Johnson). He lost to Joseph Benavidez in 2013 (=Benavidez vs Formiga) but since then he has won three consecutive fights beating Wilson Reis in his last one.
His opponent, the undefeated 2008 Olympic gold medalist in freestyle wrestling, Henry Cejudo, has a mma record of 9-0-0 (44% finishing rate) and he entered as the No.7 in the same weight class. He has fought twice in 2015 defeating Chris Cariaso (=Cariaso vs Cejudo) and Chico Camus (=Cejudo vs Camus). Cejudo vs Formiga is on the undercard of Neil Magny vs Kelvin Gastelum – The Ultimate Fighter Latin America 2 Finale – UFC Fight Night 78. Watch the video and rate this fight!