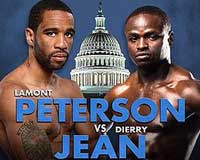 Review: 2014-01-25, pretty good fight between Lamont Peterson and Dierry Jean: it gets three stars. Lamont Peterson entered this fight with a professional boxing record of 31-2-1 (16 knockouts) and he is ranked as the No.4 light welterweight in the world, his only two defeats came to Timothy Bradley in 2009 and against Lucas Matthysse in his last fight in 2013. His opponent is the undefeated Dierry Jean, he has a perfect record of 25-0-0 (17 knockouts) and he entered as the No.16 in the same weight class (currently the #1 in this division is Danny Garcia). Peterson vs Jean is valid for the IBF light welterweight title, first world title fight for Jean. Watch the video and rate this fight!