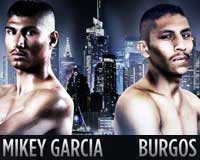 Review: 2014-01-25, technical fight but not so spectacular: Mikey Garcia vs Juan Carlos Burgos gets two stars. The undefeated Mikey Garcia (real name Miguel Angel Garcia) entered this fight with a perfect record of 33-0-0 (28 KOs=85%) and he is ranked as the No.1 super featherweight in the world while Juan Carlos Burgos has an official record of 30-1-2 (20 knockouts) and he entered as the No.22 in the same weight class, his only loss came to Hozumi Hasegawa in 2010 but both his last two fights ended in a draw, one against Roman Martinez (who instead was deafeated by Mikey Garcia) and the other one against Yakubu Amidu. Garcia vs Burgos is valid for the WBO super featherweight title (Garcia’s first defense). Watch the video and rate this fight!