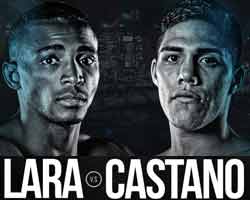 Review by AllTheBestFights.com: 2019-03-02, good fight between Erislandy Lara and Brian Castano: it gets three stars.

The Ibo and Wba super-Ww champion Erislandy Lara entered this fight with a professional record of 25-3-2 (14 knockouts) and he is ranked as the No.3 super welterweight in the world (currently the #1 in this division is Jaime Munguia) but he comes off the loss against Jarrett Hurd (Erislandy Lara vs Jarrett Hurd); before this bout, in 2017, he had beat Yuri Foreman (Lara vs Foreman) and Terrell Gausha (Erislandy Lara vs Terrell Gausha).
His opponent, the undefeated Wba light-Mw champ Brian Carlos Castano, has a perfect boxing record of 15-0-0 (11 knockouts) and he entered as the No.8 in the same weight class. In his last three fights he has won over Emmanuel de Jesus, Michel Soro (Michel Soro vs Brian Carlos Castano) and Cedric Vitu (Brian Carlos Castano vs Cedric Vitu). Lara vs Castano is valid for the WBA World super welterweight title (Castano’s second defense). Watch the video and rate this fight!