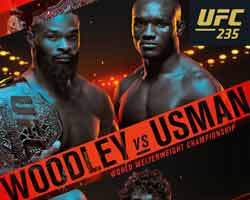 Review by AllTheBestFights.com: 2019-03-02, disappointing fight between Tyron Woodley and Kamaru Usman: it gets two stars.

The black belt in Bjj and current Ufc Ww champion Tyron Woodley entered this fight with a pro mma record of 19-3-1 (63% finishing rate) and he is ranked as the No.1 welterweight in the world. He suffered his last loss when he faced Rory MacDonald in 2014 (Rory MacDonald vs Tyron Woodley), since then he has collected six victories and one draw beating Demian Maia (Tyron Woodley vs Demian Maia) and Darren Till in his last two (Tyron Woodley vs Darren Till).
His opponent, the Tuf tournament winner Kamaru Usman, has a record of 14-1-0 (50% finishing rate) and he entered as the No.3 in the same weight class. He suffered his only loss when he faced Jose Caceres at his second professional mma fight in 2013, since then he has collected 13 consecutive victories beating Emil Weber Meek (Kamaru Usman vs Emil Weber Meek), Demian Maia (Demian Maia vs Kamaru Usman) and Rafael dos Anjos in 2018 (Rafael dos Anjos vs Kamaru Usman). Woodley vs Usman is valid for the Ufc welterweight title (Woodley’s fifth defense); undercard of Jon Jones vs Anthony Smith – UFC 235. Watch the video and rate this fight!