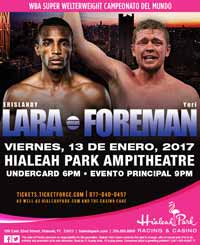 Review by AllTheBestFights.com: 2017-01-13, pretty good finish between Erislandy Lara and Yuri Foreman but it is not enough to get three stars: it gets two.

The Ibo and Wba light Mw champion Erislandy Lara entered this fight with a professional boxing record of 23-2-2 (13 knockouts) and he is ranked as the No.3 super welterweight in the world while his opponent, Yuri Foreman, has an official record of 34-2-0 (10 knockouts). Lara suffered his last loss when he faced #1 Saul ‘Canelo’ Alvarez in 2014 (via split decision, Canelo vs Lara) but the then he has won four bouts beating Vanes Martirosyan in 2016 (=Lara vs Martirosyan 2) while Foreman had lost two consecutive fights between 2010 and 2011, against Miguel Cotto and Pawel Wolak, but then he has won six times. Erislandy Lara vs Yuri Foreman is valid for the IBO and WBA Super World super welterweight titles. Watch the video and rate this fight!