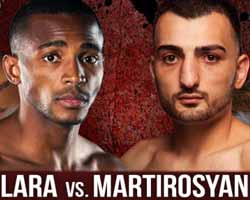 Review by AllTheBestFights.com: 2016-05-21, disappointing fight between Erislandy Lara and Vanes Martirosyan: it gets two stars.

The Wba and Ibo champion Erislandy Lara entered this fight with a boxing record of 22-2-2 (13 knockouts) and he is ranked as the No.1 super welterweight in the world. He suffered his last loss when he faced Saul ‘Canelo’ Alvarez in 2014 (via split decision, Canelo vs Lara), since then he has won three bouts beating Delvin Rodriguez (=Lara vs Rodriguez) and Jan Zaveck in 2015 (=Lara vs Zaveck).
His opponent, Vanes Martirosyan, has an official record of 36-2-1 (21 knockouts) and he entered as the No.5 in the same weight class. He fought twice last year losing to Jermell Charlo (=Charlo vs Martirosyan) and defeating Ishe Smith (=Martirosyan vs Smith). Lara vs Martirosyan 2 is valid for the IBO and WBA World super welterweight titles while their first bout was valid as WBC title elimination but ended in a technical draw because Martirosvan cut over left eye (=Martirosyan vs Lara I). Watch the video and rate this fight!