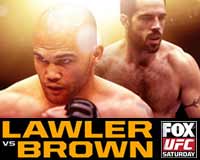 Review: 2014-07-26, great performance by both fighters: Robbie Lawler vs Matt Brown gets three stars (UFC Fight of the Night). Robbie Lawler entered this fight with a professional mma record of 23-10-0 (87% finishing rate) and he is ranked as the No.4 welterweight in the world (currently the #1 in this division is Georges St Pierre), he has already fought twice in 2014 losing the first bout against Johny Hendricks for the Ufc Ww title (=Hendricks vs Lawler) but then he defeated Jake Ellenberger (=Lawler vs Ellenberger).
His opponent, Matt Brown, has an official record of 19-11-0 (89% finishing rate) and he entered as the No.9 in the same weight class, he suffered his last loss in 2011 when he faced Seth Baczynski, since then he has won seven consecutive bouts, the last one against Erick Silva (Fight of the Year candidate Brown vs Silva). Lawler vs Brown is the main event of UFC on Fox 12. Watch the video and rate this fight!