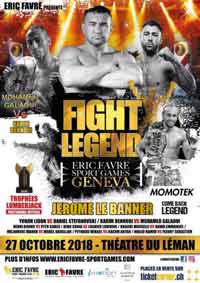 Review by AllTheBestFights.com: 2018-10-27, disappointing fight between Jerome Le Banner and Wojciech Bulinski: it gets two stars.

The black belt in karate, judo and former Wkn, Iska, Wpmf world champion Jerome Le Banner entered this fight with a pro kickboxing record of 81-22-2 (65 KOs=80%) while his opponent, Wojciech Bulinski, has an official mma record of 13-2-0 (92% finishing rate). Le Banner he is not ranked as he hasn’t fought since August 4, 2015 when he defeated Karl Roberson (Jerome Le Banner vs Karl Roberson). Le Banner vs Bulinski is on the undercard of Yohan Lidon vs Vladimir Moravcik – Fight Legend. Watch the video and rate this fight!