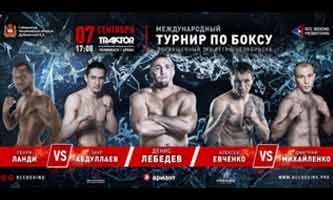 Review by AllTheBestFights.com: 2018-09-07, disappointing fight between Denis Lebedev and Hizni Altunkaya: it gets two stars.

The former Ibf and Wba champion Denis Lebedev entered this fight with a record of 30-2-0 (22 knockouts) but he is not ranked as he hasn’t fought since July 9, 2017 when he defeated Mark Flanagan (Denis Lebedev vs Mark Flanagan); before this bout he had lost to Murat Gassiev (Denis Lebedev vs Murat Gassiev).
His opponent, Hizni Altunkaya, has a boxing record of 30-2-0 (17 knockouts) and he entered as the No.109 cruiserweight in the world. He lost two out of his last three fights, with Krzysztof Glowacki in 2017 (Krzysztof Glowacki vs Hizni Altunkaya) and with Beibut Shumenov in 2018 (Beibut Shumenov vs Hizni Altunkaya) but between these two bouts he beat Niko Lohmann. Lebedev vs Altunkaya is the main event of the evening. Watch the video and rate this fight!