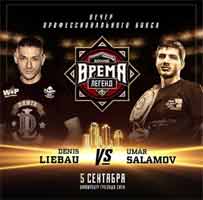 Review by AllTheBestFights.com: 2018-09-05, pretty good finish between Umar Salamov and Denis Liebau but it is not enough to get three stars, it gets two.

The former Ibo light-Hw champion Umar Salamov entered this fight with a pro boxing record of 21-1-0 (16 KOs=76%) and he is ranked as the No.15 light heavyweight in the world. He lost to Damien Hooper last year but then he has won over Artem Redko and Brian Howard (Umar Salamov vs Brian Howard).
His opponent, Denis Liebau, has a record of 24-2-0 (22 KOs=92%) and he entered as the No.104 in the same weight class. He has already fought twice in 2018 losing to Emil Markic and beating Grzegorz Sikorski. Salamov vs Liebau is valid for the vacant IBF European and WBO International light heavyweight titles. Watch the video and rate this fight!

(Free embeddable video hosted on Youtube and not uploaded by AllTheBestFights)
https://www.youtube.com/watch?v=Viy65WrMrtM