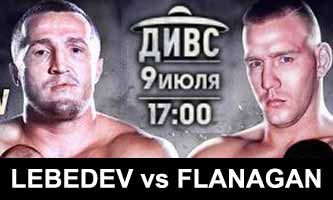 Review by AllTheBestFights.com: 2017-07-09, disappointing fight between Denis Lebedev and Mark Flanagan: it gets two stars.

The former Ibf and current Wba champion Denis Lebedev entered this fight with a professional record of 29-2-0 (22 KOs=76%) and he is ranked as the No.6 cruiserweight in the world (currently the #1 in this division is Oleksandr Usyk). He fought twice last year defeating Victor Emilio Ramirez (=Lebedev vs Ramirez) and losing to Murat Gassiev (=Lebedev vs Gassiev).
His opponent, Mark Flanagan, has a boxing record of 22-4-0 (15 knockouts) and he entered as the No.50 in the same weight class. He suffered his last loss when he faced Daniel MacKinnon in 2013, since then he has collected 11 consecutive victories beating Isileli Fa in his last one. Denis Lebedev vs Mark Flanagan is valid for the WBA Super World cruiserweight title. Watch the video and rate this fight!